Clayton is a city in and the county seat of St. Louis County, Missouri, United States,[6] and borders the city of St. Louis. The population was 15,939 at the 2010 census.[7] The city was organized in 1877 and is named after Ralph Clayton,[8]who donated the land for the courthouse. The city is known for its multiple skyscrapers in its business district.

Clayton is governed via six member board of aldermen and a mayor. Aldermen are elected from one of three wards with each electing two members. The mayor is elected in a citywide vote. A city clerk is appointed by the Mayor and Board of Aldermen.[citation needed]

The town has a police department headed by Kevin R. Murphy.[11] 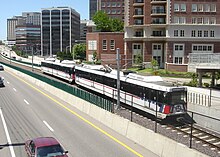 A Blue Line MetroLink train bound for Shrewsbury-Lansdowne I-44 station passes by downtown Clayton. The train is travelling in the median of Forest Park Parkway.

Clayton is served by the Metrolink light rail system. The city has two stations along the Blue Line: Clayton, and Forsyth. Metro also operates bus services in Clayton.

Major roads and highways in Clayton include Interstate 170, Brentwood Boulevard, Hanley Road, and Forest Park Parkway.[19] Old Bonhomme (renamed Forsythe Boulevard when it changes from North-South to East-West direction) in North Clayton is an ancient Native American trail. Wydown Boulevard in Clayton was called one of the nation's most dignified streets in the AIA Architecture Guide to St. Louis.